The same story goes for The Ultimate Developer PC 2.0, only that now it’s Scott Hanselman and Pete Brown building their new machines with an obession of having to achieve a 7.9 score on the Windows Experience Index (WEI).

Back in August 2007 with The Ultimate Developer PC 1.0, Scott Hanselman achieved a WEI of 5.8. I guess what started the 7.9 WEI obsession, is the WEI Share website where you can show off your score, and throw down your parts list. Great idea.

Looking at Scott Hanselman’s purchase, it totals $3,168. That’s a lot, but if you do get value for money – that is awesome. I have no problem with that!

I built my machine back in November 2009. I had one goal: To built a kick ass machine, that didn’t break the bank completely. I’m not a gamer. I have an XBOX 360 for that. I do pick up a game occasionally, though, Starcraft 2 is in my thoughts – but I resist. Modern Warfare 2 has been lying on my PC unopened for almost two months now.

The video card must be able to power up my Dell 30” primary monitor, and my Dell 24” secondary monitor, without long wait times for repainting and such.

Here goes my parts lists including the current price found at NewEgg.com:

Yeah – but what about the WEI score?

So, what score does a machine for half the price get on the Windows Experience Index: 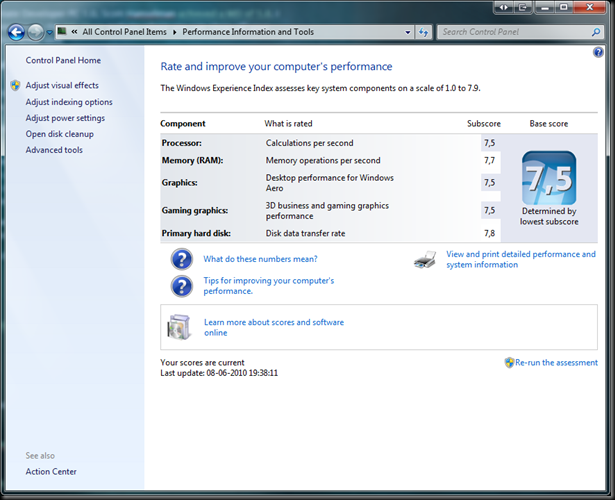 I mentioned earlier, that Modern Warfare 2 has been lying on my case for 2 months. Not anymore, I installed it to see how well this machine would do. Remember, it’s a <$150 video card, and I’m still able to spin up MW2 in 2560 x 1600 with full details enabled. I recorded a video on my phone, and uploaded it to YouTube. Check it out here:

I think that is a pretty good achievement. And remember that these parts are from November 2009! I didn’t pick the newest parts at that time, basically because I think you get a lot more value for money by picking parts that has been released for a month or two.